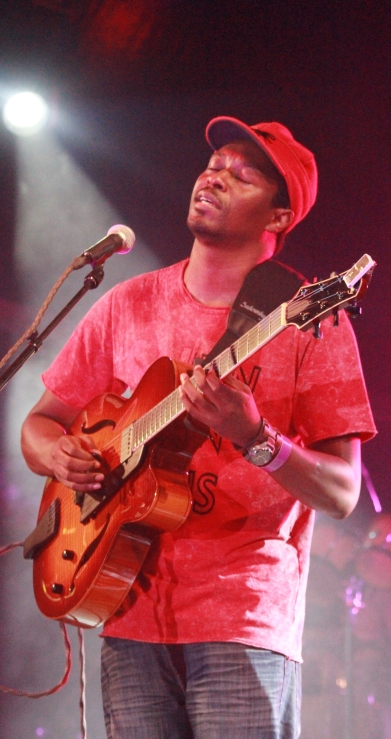 Over the last twenty five years, guitarist, composer, songwriter, arranger and producer João Cabral Armando has been a passionate musical innovator committed to the exploration of many different art forms on the African landscape.

He started playing guitar in church at the age of 17. At first he was drawn to rock music and spent his youth listening to and imitating songs by groups and musicians like Dire Straits, Europe, Pink Floyd, Eric Clapton, Iron Maiden, Carlos Santana, Guns n’ Roses, AC/DC, Bon Jovi and Queen. In 1990 he listen for the first time to George Benson and Earl Klugh, two great jazz guitar players. He fell in love with jazz after hearing the albums “We Live Here” by Pat Metheny Group and “Rio Funky” by Lee Ritenour, and started taking jazz lessons in 1995. “I was self taught and I was eager to devour Joe Pass’s book and his tape recordings, and the recordings of Wes Montgomery, Charlie Parker, and other jazz musicians,” says Cabral.

In 1997 he began playing live in jam sessions and afterwards in small combos with several musicians. In 2003 Cabral decided to pursue music studies and moved to Cape Town where he enrolled in the Jazz Studies Department of the University of Cape Town’s South African College of Music. He studied Jazz Performance for three years and completed a Postgraduate Diploma in Music (Jazz Performance) in 2007.

Cabral considers himself an accomplished composer. “I make up my own melodies and harmonies. And it’s hard to say where they come from. My music is a mix of all the influences I have been exposed to during my musical life: Pat Metheny, Wes Montgomery, George Benson, Joe Pass, Lee Ritenour, Luis Salinas Biréli Lagrène, Mark Whitfield, Kevin Eubanks, Brian Hughes, Henry Johnson, Michael Sagmeister, Nelson Faria, Djavan, Teddy Pendergrass, Emilio Santiago, Martinho da Vila, Barney Rachabane, Lokua Kanza, Bonga, Manu Dibango…as well as the music of my roots. My music comes from my heart and soul. I hear a melody or line or voice inside me and then I express it on the guitar.”

Cabral has numerous original compositions within the Afro-Jazz musical tradition, combining both traditional and modern elements of jazz. Although he is drawn to the sounds of West, Central and Southern Africa, and to South American and Latin music, jazz remains his first love. Invocation, Tsepho Baya Bayo, Darleny, John Cab’s Hymn, Las Cabralinas, Mama Mina, African Town, African Soul, Vajula Kutsaka, Chamanculo and Xidzilu Xanga are some disc titles of his debut album “River of Dreams” where these mixtures, this miscegenation materializes. All songs are of his own. Note that the album “River of Dreams ” was on Top 20 of World Music in 2010 in Europe and in the Top 10 RDP-Africa from Portugal. His album won the Top Instrumental Award, MMA (Mozambican Music Awards) 2010 edition.

João Cabral currently lives in the United States of America and has performed in the bands of Kina Zoré, Luna Latin Jazz, Kalifa and Koliba and      Victor Wooten’s Ensemble at the Berklee College of Music. He is also part of the New York based International Brazilian Opera Company as a musician and music educator.